How to get to Camden Market, London

Camden market is the heart of North London.

Bustling stalls with loud market sellers create a booming atmosphere- one that’s easy to get lost in. You see, getting to Camden market is the easy part. It’s once you arrive, with spectacular food stalls around every corner, that leads to difficult dilemmas for all of the tourists weaving the alleyways.

On any trip to London, a visit to Camden market is a must. Whether you’re staying in the area at Selina Camden or commuting from further afield, the hectic nature of the market stalls is enough to make most tourists feel alive. Adrenaline, caused by the shrieking sellers draws in even the most stable and well-traveled visitors.

So say hello to your inner child and get excited for a trip to Camden market.

Embrace a life without borders! Work, stay, and explore at Selina Camden!

What is Camden lock market famous for?

Camden lock market is a collection of market traders originating from the 1970s. Selling all sorts of wares, from handmade clothing to jewelry and even vintage accessories, this place is heaven for a shopaholic.

When it was first formed, Camden market was popular among the goth and punk scenes. With the addition of a nearby indie and punk music venue, The Underworld, many who identified with the punk lifestyle chose to make Camden their home. Even now, on a given day visitors will find the Camden punks, a group of activists, protesting for various causes.

However, now in the 21st century, the Camden food market has become more ‘mainstream’. While many of the original sellers did not make it through the lockdowns, new stalls began to migrate here (mainly in the form of food businesses).

Therefore, Camden market has changed its face in recent years with a large development and an explosion in food options. From vegan burgers to luxury hot chocolates, Argentinian steak houses and Indian street food, there is something for everyone.

Moreover, the location is not a one-stop wonder; the wider Camden area has plenty of things to do on your trip to London. 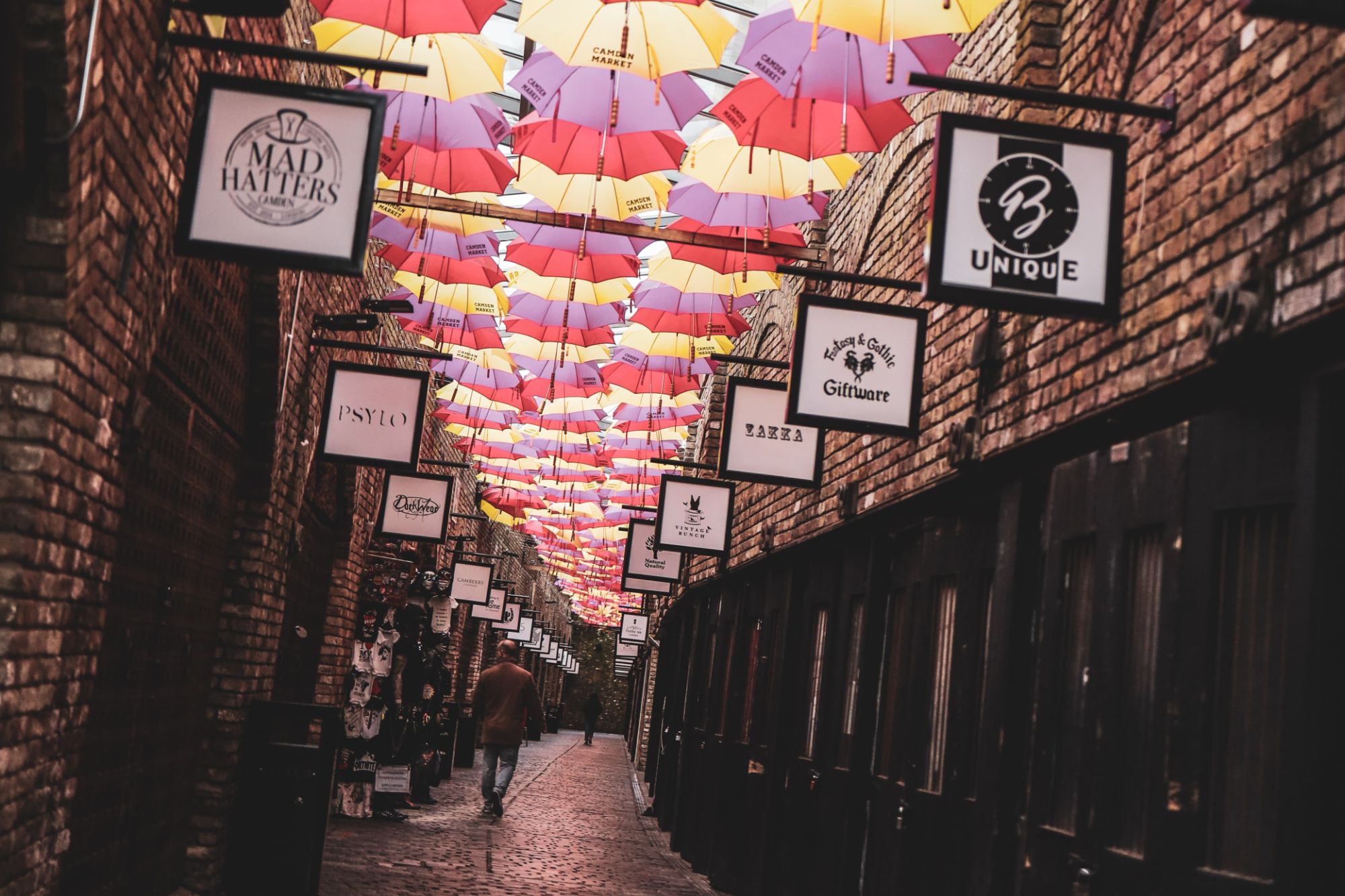 Where is Camden market, London?

It’s all well and good talking about the spectacular feeling most of us get when we attend Camden for the first time. But where is Camden market?

Camden market is, of course, located in London. It’s found to the North of the city and can be reached via ‘tube’ (or London’s underground train network). Most will choose to take the Northern line, Northbound from any central London location.

Alternatively, there are many attractions around Camden which mean it can fit into a wider itinerary. For example, the London Zoo is in Regents Park, just a 16-minute walk from Camden market.

How to get to Camden town market?

Camden market is to the North of Camden town. Its closest public transport stops are just a one-minute walk away by bus or the same for an overground train. The closest tube stop is approximately five minutes walk.

But directions to Camden market depend on what mode of transport you’re taking, as well as the origin of your journey.

So, we’ll take a look at how to get to Camden town market when you’re: 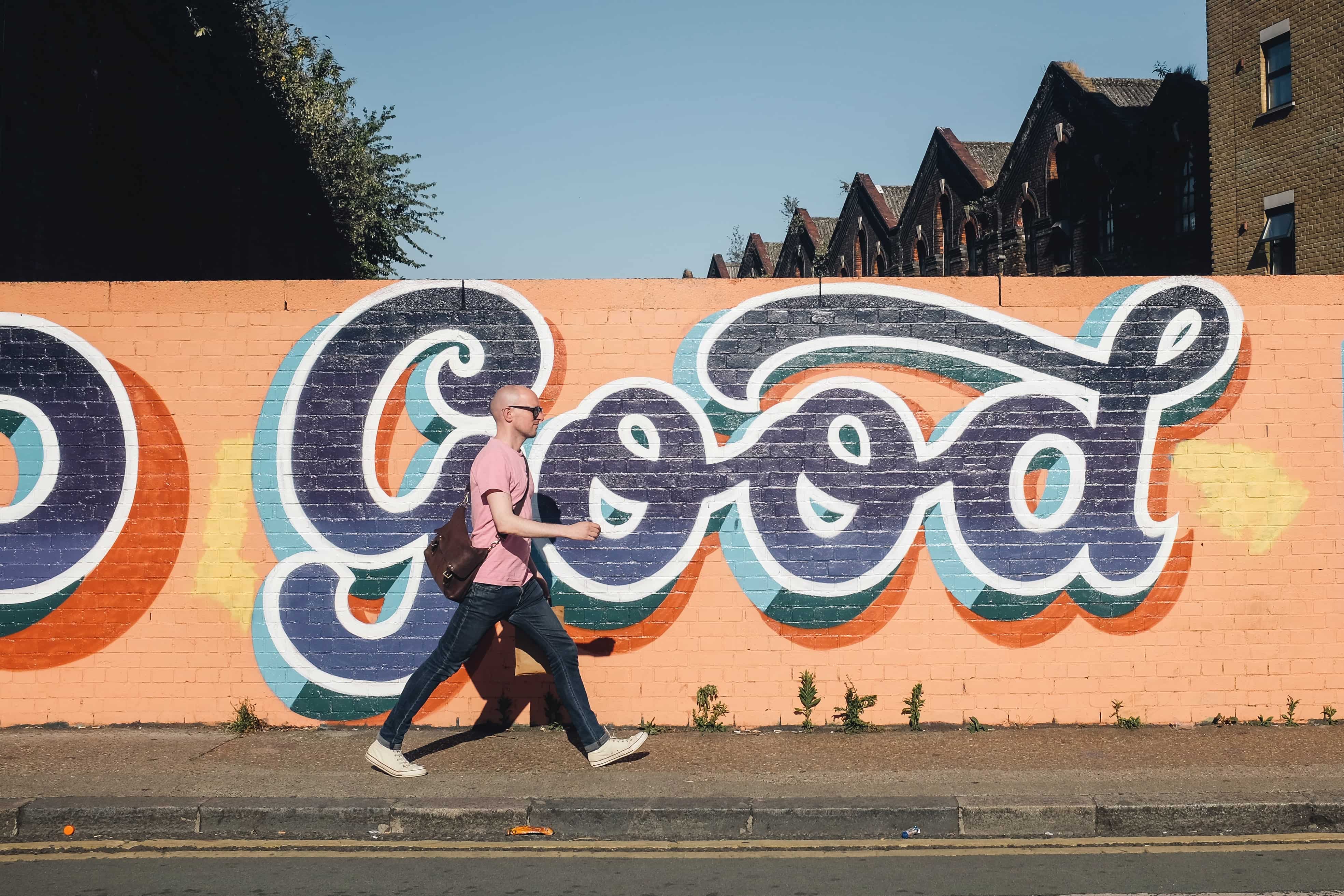 For tourists who are already nearby, walking will be the easiest way to reach Camden market.

From Selina Camden, simply walk out of the main entrance and turn left. Continue walking down the road for about seven minutes, and you’ll reach the markets. It’s a straight shot!

From Regent’s Park, find the exit closest to the Regent’s Canal. Then, turn left and begin walking along the river. Continue on this road for approximately 10 minutes until you hit Camden high street head-on. Turn left just after the Starbucks coffee in order to reach Camden Market.

With Little Venice just one mile away, it’s a good option for a walk on a sunny day in London. And if the sun is not out, just be sure to pack your rain jacket!

For a more scenic route, some visitors choose to walk from Paddington, although this takes significantly longer than many of the other destinations. It takes approximately one hour walk according to Google maps. Still, the route is fairly simple.

Finally, most Camden market restaurants are just a minute’s walk down the road in a Southerly direction. 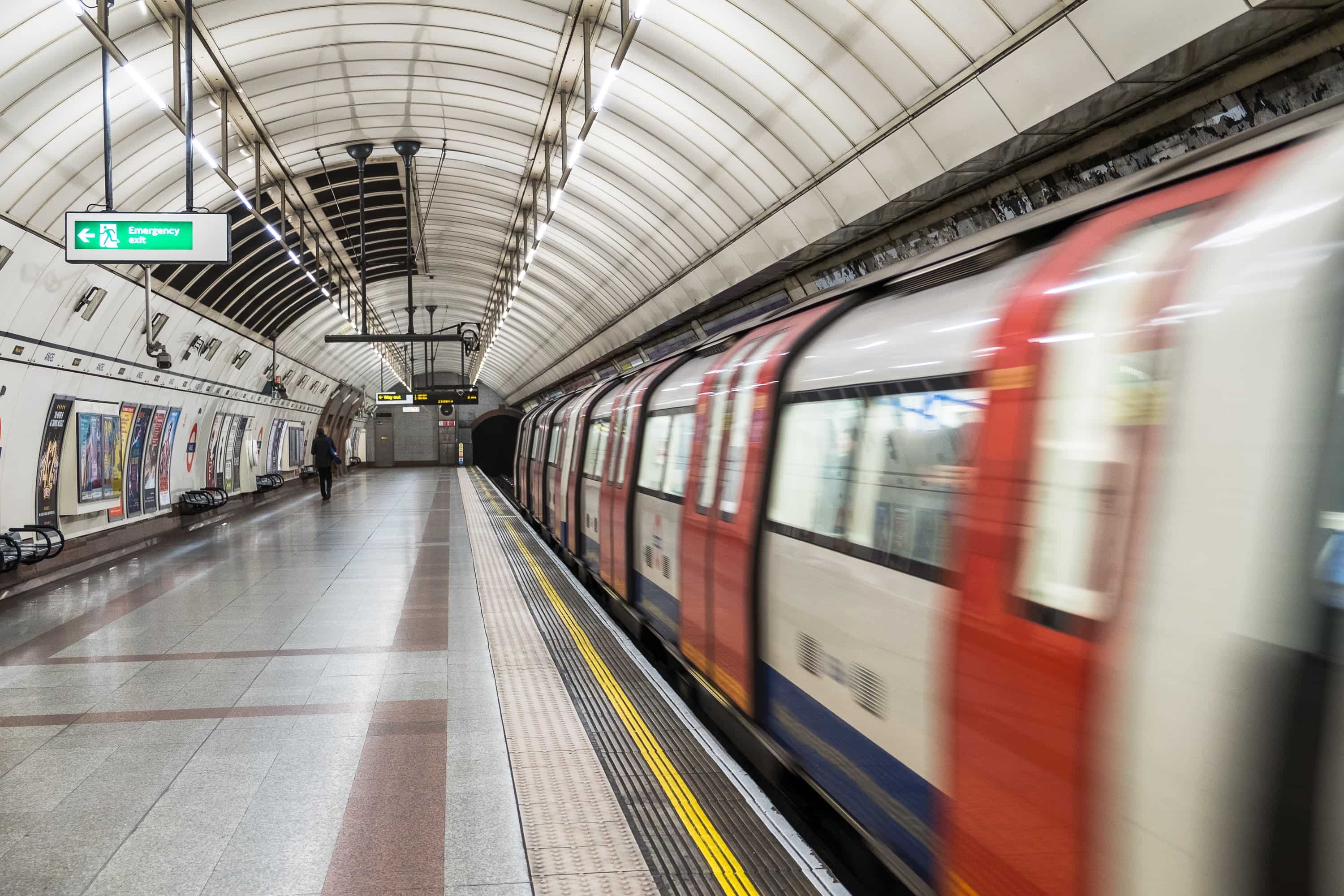 The nearest tube to Camden market is Camden Town. This is located on the Northern line (the black line on the underground map) and the likelihood is that you’ll be traveling Northbound if coming from anywhere in central London.

Another nearby station is Chalk Farm, which is just one stop onwards from Camden Town. However, the Northern line splits into two directions after stopping at Camden Town, so if you want to get off at Chalk Farm then look for a train going to Edgware.

If you make a mistake and take a tube to High Barnet instead, there will be no option to get out at Chalk Farm. At this point, it’s best to get off the tube as soon as you realize, and then cross the station to reach the Southbound platform. Get on the next available train towards Morden and leave the train at Camden Town.

Getting the overground train to Camden market is likely to be much easier than trying to stop at Chalk Farm if it’s your first time on the tube. Camden Road is the closest overground train station, and it’s an eight-minute walk from here to the markets. Most of the trains leaving and arriving here are from other London destinations, such as Clapham Junction, Stratford and Richmond.

The Travel For London (TFL) works by tapping a contactless card, oyster card, or inserting a ticket. Unless you’re commuting from outside of London, it’s probably not worth buying a ticket from the machine. Instead, use one of your debit or credit cards with contactless capabilities and simply tap in and out at your origin and destination stations. The daily TFL fee is capped at £7.70, and most individual journeys are less than £1.

There are lots of different busses that you can take to get to the Camden market shops.

Hartland Road is by far the closest stop to Camden market and is literally right outside of the markets on the main road. There are eight different buses that stop at this station, including:

The daily fare cap for bus travel in London is currently £4.95, however, the TFL does offer an unlimited journey pass within 1 hour for just £1.95.

Other nearby bus stops include Hawley Road, Kentish Town and Chalk Farm Road.

While it’s incredibly difficult for tourists to navigate London’s streets by car (even domestic tourists), hailing a taxi is like second-nature to some. Let’s not get started on the shockingly poor parking Camden market has to offer. Fortunately, the black cabs in London are countless, and it doesn’t take long to spot a taxi when you need one.

Hailing a taxi in London is very similar to what you see on movies in New York- just stick your arm out into the road and try to catch the driver’s attention. Of course, sometimes the cab already has passengers, so it may take a few tries for a driver to pull over. 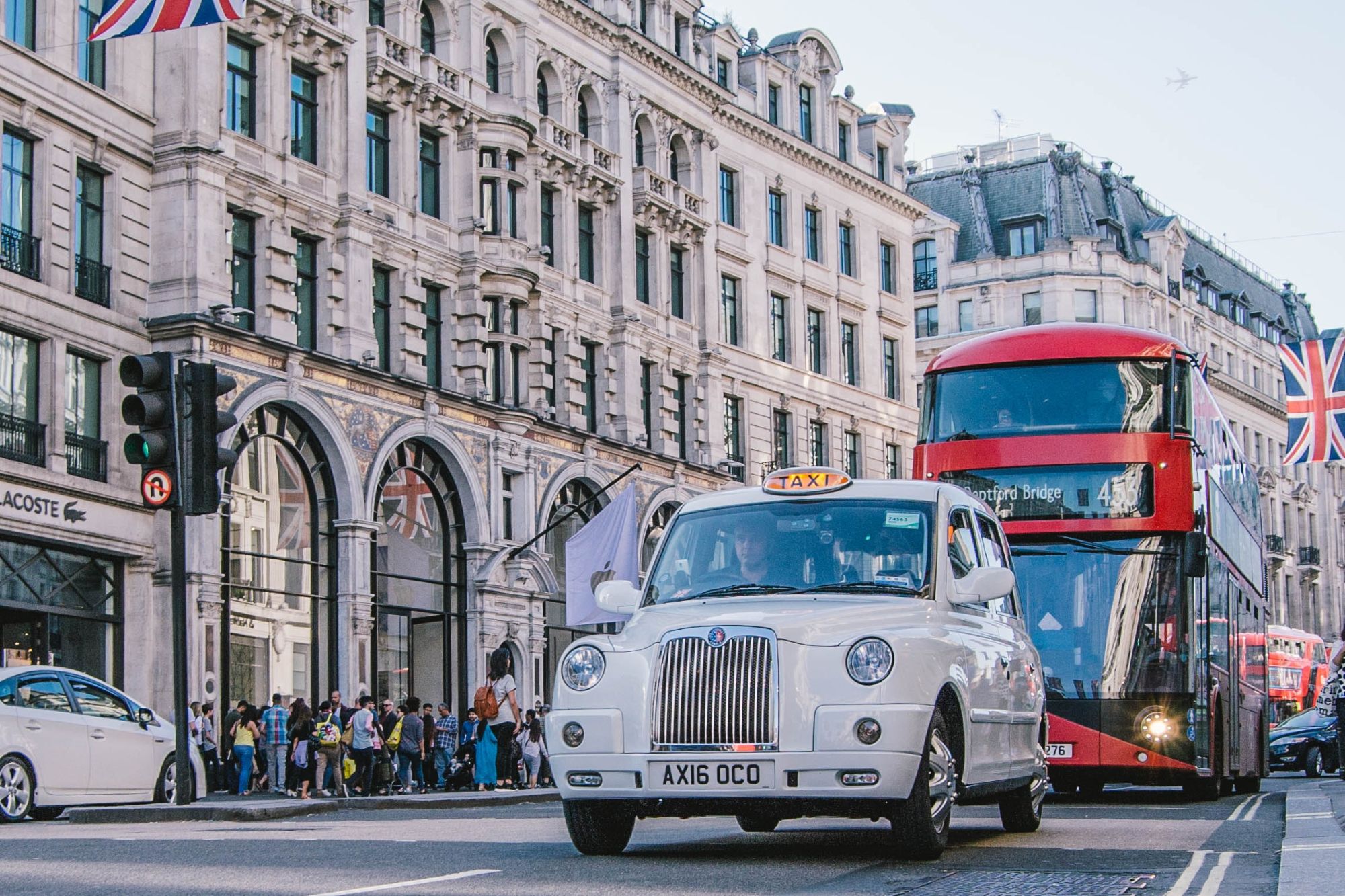 First introduced in the 19th century, Black Cabs are one of the must-see staples of London. Even today though, they are well-liked since there is a glass screen separating every driver from its passengers. For safety and hygiene reasons, this has come in very handy in recent years.

Typical taxi fares are as follows:

Bear in mind that the minimum fare for any journey in London is £3.20, and you’ll need to carry cash to pay the driver.

If you’re going straight for the food, Camden market doesn’t have good street parking options. However, ask your cab driver to drop you off at the Camden lock bridge for street food, or at Buck Street market for a sit down meal.

As well as traditional black cabs, Londoners also have access to rideshare apps like Uber and Bolt. These are a great option when it’s busy as you’ll have less chance of riding a black cab, or on the occasions where you don’t have cash since everything is paid for in the app.

Anyone coming to Camden from outside of the UK would have to fly into the airports. Fortunately, there are four main London airports within a 2 hour drive of Camden market, the closes being London Heathrow, at just 14 miles away. Once landing, there are train, bus and taxi options that will ferry passengers into the city center.

Other London airports include:

From the US, a flight into London should take a minimum of 5 hours, but West Coasters will have a much longer flight duration.

And if you’re wondering if Camden market’s open as soon as you fly in, the chances are that it is. The market is open every single day from 10 am to 6 pm, except for Christmas day.

Where to stay in Camden?

Since Camden is on the smaller side compared to other boroughs of London, wherever visitors end up staying is usually considered central to the London Camden market.

One of the best hotels near Camden market is Selina. In the same area as the Camden market postcode (NW1), tourists are only obliged to walk less than ten minutes down one straight road to arrive at the main attraction.

Here, guests can choose between luxury private lofts and suites or sociable dorm rooms for a more affordable option. With an undeniable vibe, the property comes with a cozy basement for vinyl listening parties on those days when going outside just feels like too much of a chore. 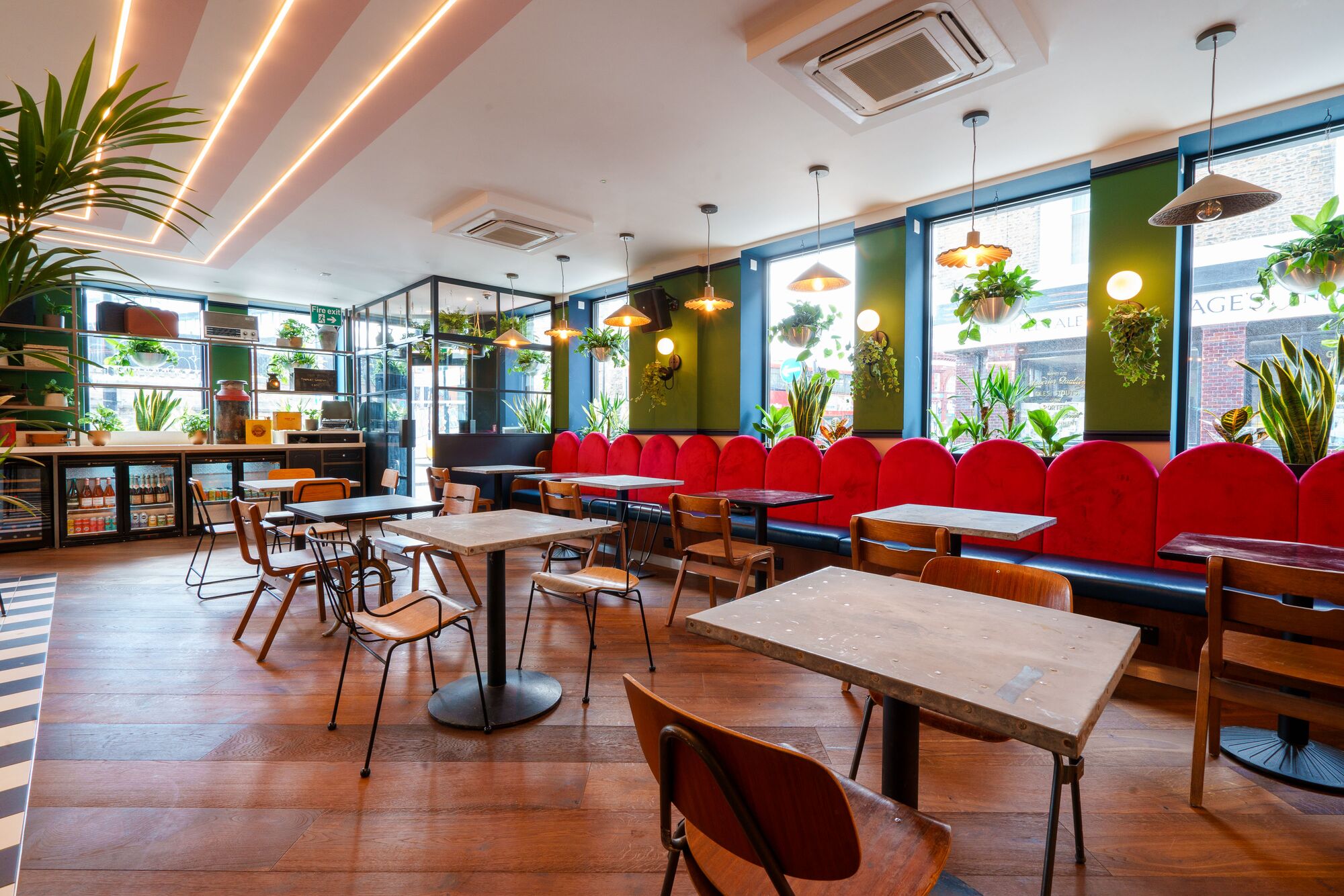 The communal kitchen is the perfect place to make new friends and share delicious home-cooked meals, although it’s hard to become bored of the market street food.

If you’re looking to stay outside of Camden, we’d recommend avoiding most ‘City of London’ areas where prices are hugely inflated. Places like Canary Wharf, Leicester Square and Oxford Street have huge reputations, but there is little space for accommodation options in the center. Which also means no bang for your buck.

Before arriving in the UK, you’re probably asking yourself:

Luckily, Camden market opening times make a visit possible at almost any time of day. The sellers arrive early in the morning to prep and most stalls open at around 10 am, before closing up shop at 6 pm every evening.

While the only day that the market is closed is on Christmas, there are some best times and days to visit. Go midweek if possible, as there are a huge number of domestic tourists that visit Camden market every weekend.

Plus, remember that many of the vendors here do not accept cash, only card. So while you may need the £20 notes for your taxi driver, ensure your debit or credit cards are in working order to make purchases at the markets themselves.

Note: it can get super busy at Camden market and with loud vendors trying to ‘flog’ their wares, some people can experience sensory overload. With plenty of outside spaces, it shouldn’t be too hard to find a pocket of paradise among the bustling crowds.

Getting to Camden market is the easy part

How to get to Camden market is easy when the crowds are visible from a mile away. It’s what else you can do in this London borough that might cause a few headaches. From the Roundhouse to Underworld, to vegan cafes and jazz bars, Camden is one of the most diverse and eclectic places in Britain.

So, join us at Selina Camden to start your trip of a lifetime and experience life in London, once and for all.