Top 10 Non-Touristy Fun Things to Do in Chicago

Chicago attracts millions of tourists from all around the globe and has a record-breaking streak of having the highest number of international visitors. However, many of us would rather distance ourselves from the pack and do some non-cliche, unique Chicago activities instead.

If you’re one of those, you’re in luck – here’s your guide to exploring Chicago like a local, which contains all the hidden gems of this city that you can hope to find! In this guide, we’ll take a look at:

Underrated Cool Things to Do in Chicago

You’ll find dozens of options when it comes to things to do in Chicago – taking selfies at the Willis Tower Skydeck or admiring The Bean being two common ones. But there’s a lot more to the Windy City than just tourist hotspots. Let’s get into some fun things you can do in Chicago that are often overlooked by most tourists.

1.Get In the Water

In case you’re visiting Chicago around summer you’ve got to go for a boat ride and get in the water. You’ll get a chance to marvel at the glorious buildings and world-famous architecture of the city. There are several boat rentals downtown, but that’s the touristy way to do it. We recommend renting a private ride – it’s less common and more adventurous.

Right beside the Estate Ultra Bar, around the far-off section of Chicago River around the tourist trail section, is where you’ll find Chicago Boat Rentals. The options are limited if you’re looking to rent and operate a boat yourself, and this is probably your best bet. And there, you can get your personal vessel, ready for you and 8 to 12 other people to witness Chicago in all its serenity.

2. Drive Through The Hidden Gems in Chicago

One of Chicago’s, or even America’s, most famous drives is Lake Shore Drive. But on a good, busy day, it’s admittedly more of a parking lot than it is an epic drive. There is a very offbeat and relaxed alternative that’s not only going to let you explore the interior neighborhoods of the city, but also discover some hidden gems in Chicago.

We recommend that instead of going for a bland drive on the highway as you stare off into the background, try cruising through the obscure but beautiful Emerald Necklace. It’s a greenway built in the 1800s that consists of 26 miles of lush, pretty Chicago streets. Emerald Necklace connects the city’s pleasant parks with public squares.

It is best to start in Lincoln Park, go west along Diversey Parkway until you reach Logan Square. And from there on out, you’ll have sights after sights to behold. Start going south to reach Gage Park. You’ll see several city parks on this route, including Garfield, Humboldt, and Douglas – but the best is yet to come. Once you’re at Gage Park, go eastwards on Garfield Boulevard to finally reach the end of your trip through the Chicago Park District. There you’ll see the two crown jewels of the city – Jackson Park and Washington Park – in all their glory. That’s how you experience Chicago like a local.

3. Relax At the Beach

Chicago beaches give the tourists a quiet and peaceful experience. With high rises and massive buildings towering over the sandy seashore, the landscape can captivate anyone.

If you like it the other way round, there are also some options that are filled to the brim with tourists. For instance, you can visit Montrose Beach. It has a bar that plays live music and birding trails along the way. Additionally, south of downtown is the underrated Ohio Beach with its spectacular scenery and excellent food.

Once you’re finished exploring the beaches, you can head over to the adjacent Milton Lee Olive Park to witness a bird’s eye view of Chicago. 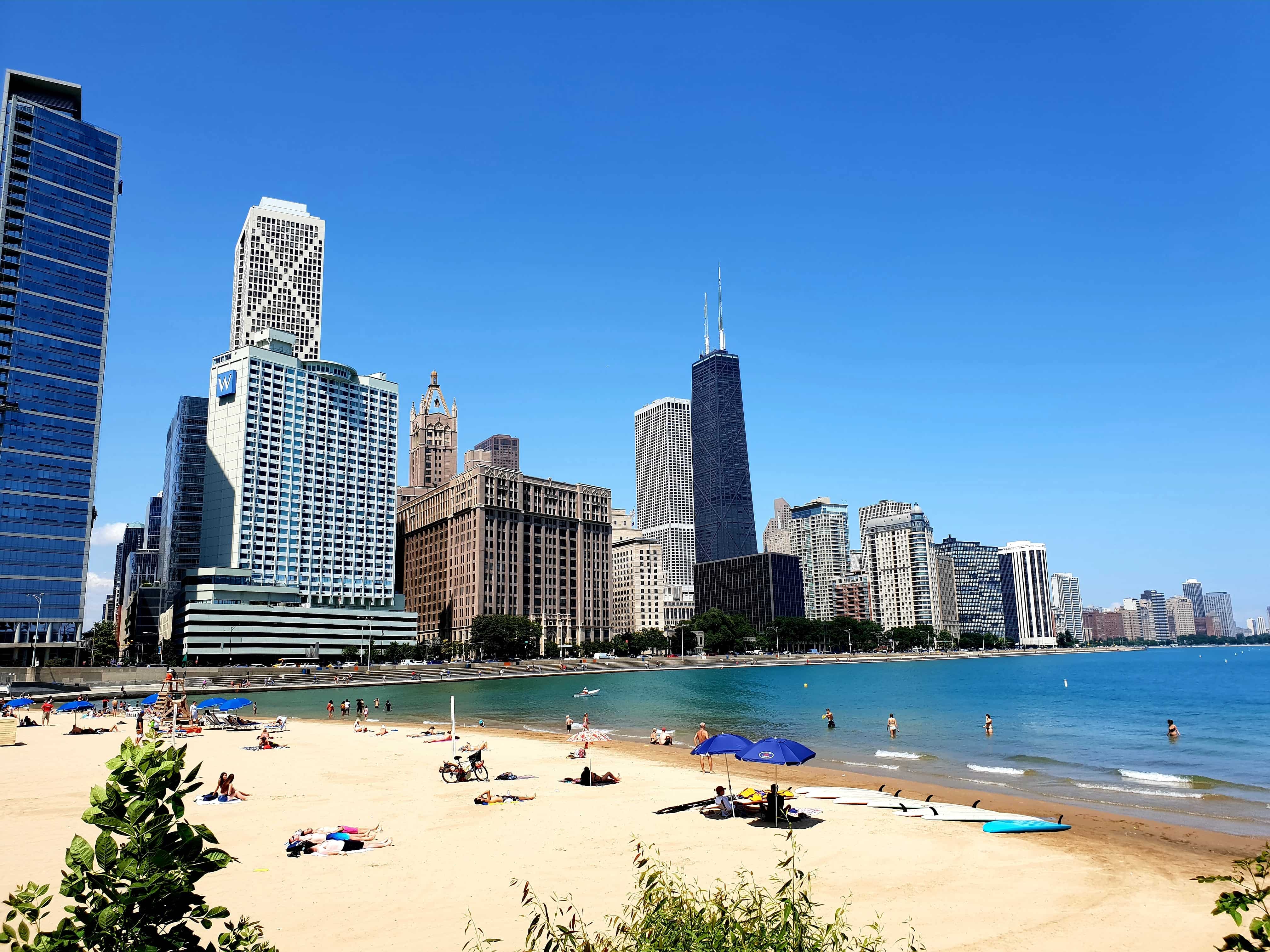 4. Take In the Sights

Two of the most common tourist attractions in Chicago are the 18.5 mile-long Chicago Lakefront Trail and the recently revamped Chicago Riverwalk. They are considered the topical way to behold the city’s sights from above, specifically, Lake Michigan and the Chicago River. However, the popularity of both sites is booming as Chicago garners more and more tourists every year. But we’re here to deliver the perfect local experience with all the cool places to visit in Chicago.

Similar to New York’s High Line that was made public in 2015, one of the best secret spots of Chicago that you can explore is The 606 – an urban, elevated hiking trail. It is a pathway stretching across 2.7 miles along what previously was a railway line. The 606 is full of life during the summer and connects four of the most fun neighborhoods of Chicago. Additionally, you’ll be 17 feet above street level and able to take in the Windy City from above. Even better are the bars and great food options nearby!

There is great street art present waiting to be found and treasured almost everywhere in America, and Chicago gets its fair share of it as well. There are several street art galleries in Chicago that are hailed as the meccas of this craft. One of these is the Wabash Arts Corridor. Located between Roosevelt Road and Van Buren in the South Loop, Wabash Avenue is home to more than 20 large-scale murals. The color schemes are mesmerizing and the artistic expression is gripping.

Wabash Avenue has been blessed by the hands of Collin van der Slujis, Jacob Watts, Eduardo Kobra among other renowned street artists. Pilsen is another cultural cornucopia brimming with Hispanic tradition and Mexican artistic expression. It has been an active street art community since the 60s and 70s and is regarded as a local favorite in Chicago. Searching for street art is easily one of the top 10 free things to do in Chicago. 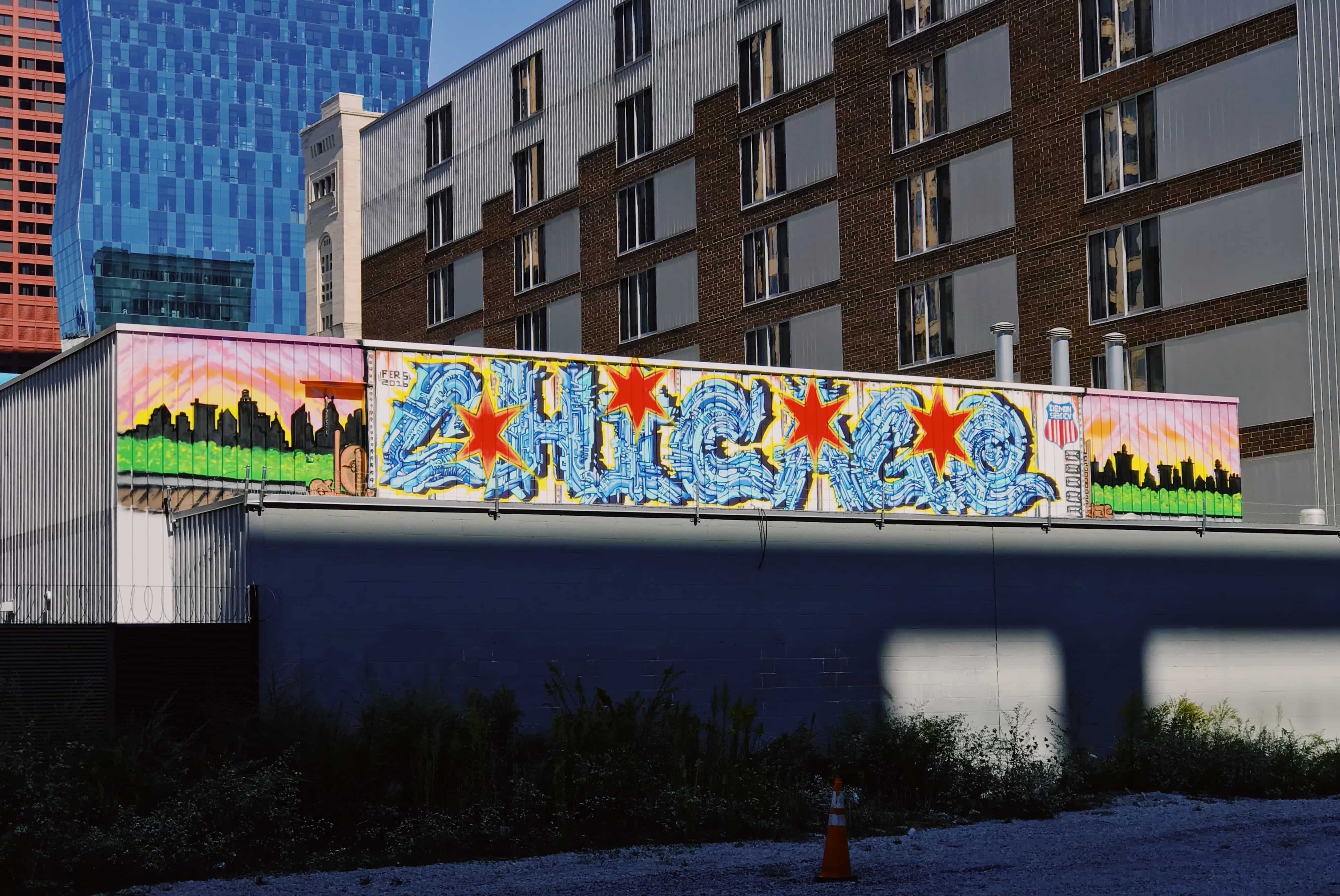 Locals’ Favorite Secret Places in Chicago You Should Definitely See

Now that we’ve brought you up to speed with all the underrated and fun things you should be doing in Chicago, let’s look at the best non-touristy places that you just can’t miss.

Established in 1907, Green Mill holds the title of being one of Chicago’s oldest bars. Another amazing thing about this place is that it’s not just an iconic Chicago landmark, but also one of the top-tier jazz clubs in the whole of America. The legendary Green Mill has lots of history behind it too.

Al Capone used to frequent the Green Mill and even had his very own table there. Another funny detail that the locals will tell you is that whenever he entered the bar, the band would break off from whatever they were playing and start playing his favorite tunes. Green Mill is undeniably a great spot for dates or hanging out with a bunch of friends. The cinema has cameoed in many films such as Thief to The Break-Up. It’s also famous for its poetry slam.

One helpful tip for newcomers to Green Mill would be to avoid talking over the band’s music loudly as it is considered impolite and frowned upon.

Easily, one of the Chicago local favorites is the live music bar – The Hideout. Almost everyone that you talk to will sing praises of this place, and understandably so. The Hideout calls itself “beloved” on its Twitter, and that is as much of an understatement as “Chicago is cold in the winters”.

Situated in an obscure, far-off end of the industrial city and the normal bar scene in Chicago, The Hideout shows very little sign of existence on the outside – except an Old Style sign displayed out front. On the inside, however, the place is home to tons of jubilance, exuberant regulars, and a basement-type vibe that you won’t find anywhere else in Chicago. The showcased live music is a treat, as are the storytelling and comedy shows. If you’re looking for non-touristy secret spots in Chicago, this is it. Visit The Hideout for a warm Friday night to attend their outdoors Picnics on the Porch music series and you’ll be guaranteed to fall in love with the place. Locals consider visiting The Hideout one of the best things to do in Chicago at night.

Metro is one of Chicago’s greatest independent music institutions. This longtime running venue was opened all the way back in 1982 to fit 1,100 excited music fans on the balcony and the main floor. Much like some other spots we mentioned on this list earlier, this place is big enough that you don’t feel alone but also less known to tourists.

Metro has hosted names as big as James Brown and Iggy Pop over the years. Nowadays, people consider it to be one of the immovable cultural landmarks that have withstood the test of time as the surrounding Wrigleyville is increasingly gentrified.

Michigan Avenue’s most famous shopping street is undoubtedly The Magnificent Mile. However, for the same reason, it is thronged with tourists, customers, and frankly, overpriced stores. Armitage Avenue, on the other hand, is a much calmer and reasonable place in downtown Chicago.

Armitage Avenue is home to a long line of beauty salons, miscellaneous machine shops, and storefront churches. The whole place is full of culture and creative shopping opportunities while being relatively very obscure to tourists in comparison to the Magnificent Mile. Trendy shops, thriving local businesses, boutiques, and much more. Shop til’ you drop at Armitage Avenue.

In addition to nurturing many shopping hotspots and classic bars, Chicago also has multiple historic music theatres. One of which is The Music Box Theatre, established in 1929. It has become an art repository and creative repertory. If you’re a cinephile like lots of Chicago locals, right around Southport Avenue, you’ll see 18 neon bright shining letters calling your name.

The Music Box with its red velvet curtain and a bright starry ceiling is now seen by the community as their standard go-to for all sorts of foreign, independent, classic, and cult films. The theatre can fit up to 700 people and proudly offers popcorn with real butter to all its customers. Even better, their tickets never exceed 10$. It’s got style, personality, and a local vibe to it – a must-visit if you feel like catching a film while you’re in Chicago. 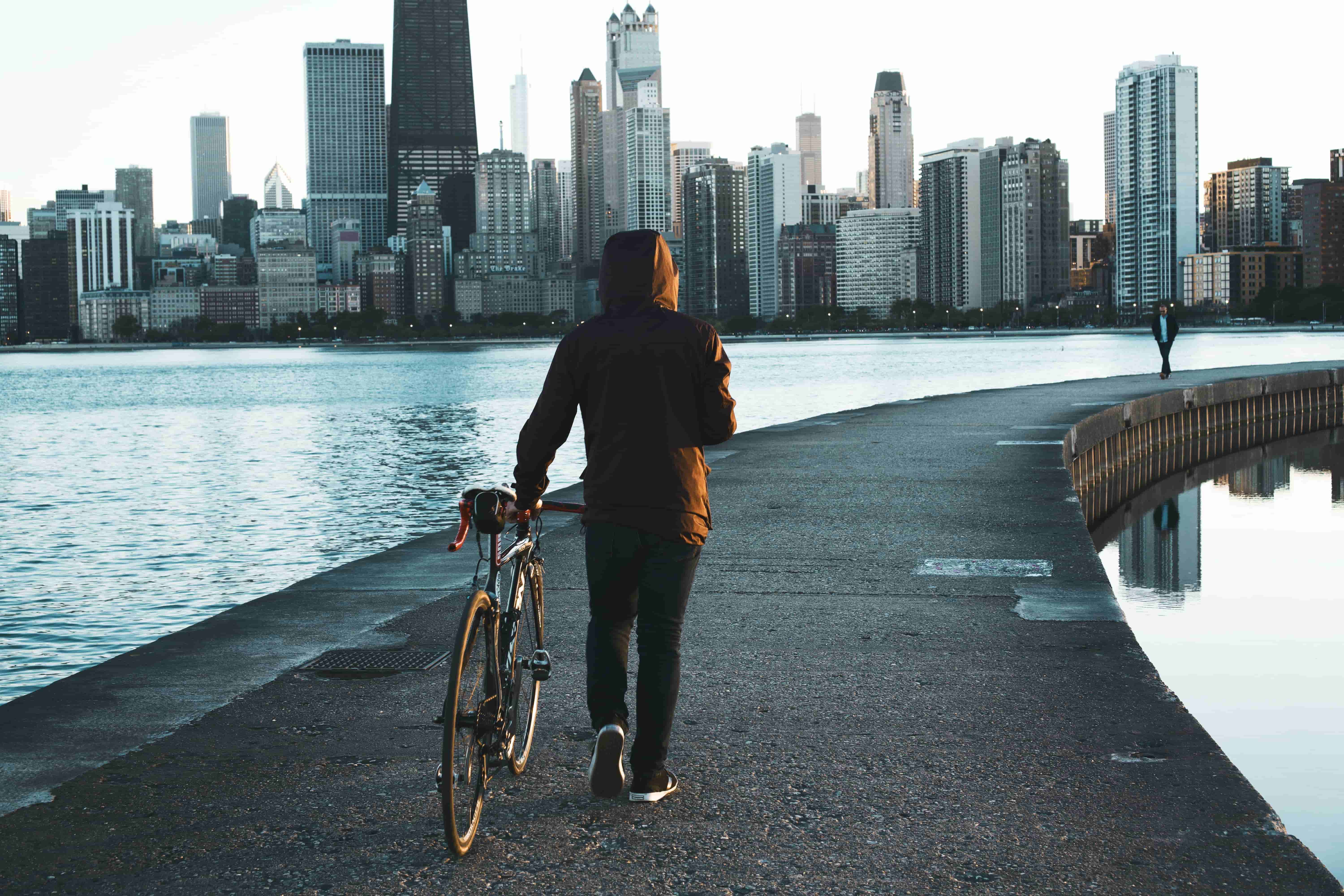 Where to Stay in Chicago

If you’re looking for a place with good amenities, accessible location, and excellent services, Selina Chicago Hotel is the right choice. Located right around Oak Street and beside Millenium Park, the hotel features a refreshing bar with cool booths. Moreover, it’s got a cafe library on the second floor that doubles up for event nights.

The hotel and restaurant are interconnected through meeting rooms and phone booths. Other amenities such as a spacious cinema, a lavish kitchen, and a full-fledged gym are also offered. If you want to explore the city, you can conveniently rent a bike or a scooter.

Chicago is next in line after NYC being the biggest tourist-beloved city in America. However, that also leads to its most common hotspots being oversaturated with people from all around the world. If you’re someone that wants to walk in the shoes of a Chicago local, this guide has paved the way.

There are many fun and adventurous things to do in Chicago, ranging from relaxing at the beach to marveling at Hispanic street art. Great places to stay and eat at as well. Put all of them together and sprinkle some of your tourist spirit on top, and you’ll get the perfect Chicago local experience!

Non-Touristy Fun Things to Do in Chicago FAQs