When most people imagine art in the biggest city in the States, they probably think of New York street art. And it’s true that there are a ton of cool graffiti pieces that vacationers and digital nomads alike can find from the Selina New York location. Many have influenced the culture of the city over the past few decades.

But there are also hundreds of exhibitions and galleries in New York. Home to the world-renown art museums of the MET and the MOMA you could argue that New York celebrates art like no other city in the world.

The art scene in New York has been thriving since, well forever. In recent years though, one district has stood out amongst all others and taken the crown for the art hub of the city: Chelsea.

So this article, we’ll be going over the ultimate Chelsea New York art guide.

While it’s still such an underrated area of the city, this district has a gallery around every corner. So much so, that it would be an achievement for hardcore art fans to become bored. So, it’s time to swap your central park, Rockefeller center and Hudson river tours for a touch of the New York art scene.

Chelsea, New York has one of the largest and most diverse art scenes in the world. There are hundreds of different galleries, pop-ups, exhibitions and displays on offer every time of year. This means that visitors are lucky; no matter how many times someone enters New York, they’re able to see a whole new set of art.

Drawing influences from the high-rise skyline and flamboyant music scene, New York’s artist residents need only look inward to their own city for inspiration. While many exhibitionists are homegrown, there are also a huge number of optimistic craftspeople who move to the Big Apple every year in hopes to make it.

In every other art guide, New York galleries are sprawled across the entire city and make it absolutely impossible for tourists to visit any more than one or two per day. This is why we’ve focused on Chelsea.

Of course, official galleries and exhibitions aren’t the only ways to see art in the city, which is home to a multitude of different street artists too. But here are a list of galleries in this specific district of Chelsea New York, from the corner of 10th and 18th, all the way North to 26th street:

Where is Chelsea in New York?

When it comes to NYC art galleries, Chelsea reigns supreme. But where actually is it?

The Chelsea district is located towards the Southern end of New York near Lower Manhattan and the Lincoln Tunnel. Most agree that Chelsea begins on West 14th Street, and extends to West 34th Street. It’s also situated from the Hudson river to 6th Avenue. For more information in order to get your bearings, check out this map of Chelsea in New York.

It’s also home to many of the classic landmarks and scenery that have given New York its reputation over the years. Chelsea contains the High Line, for example, which is a now disused rail line set 30m above ground, set between flora and fauna for tourists to walk. This free attraction is one of the best (and underrated) ways to see the city. Madison Square Garden is also located here. 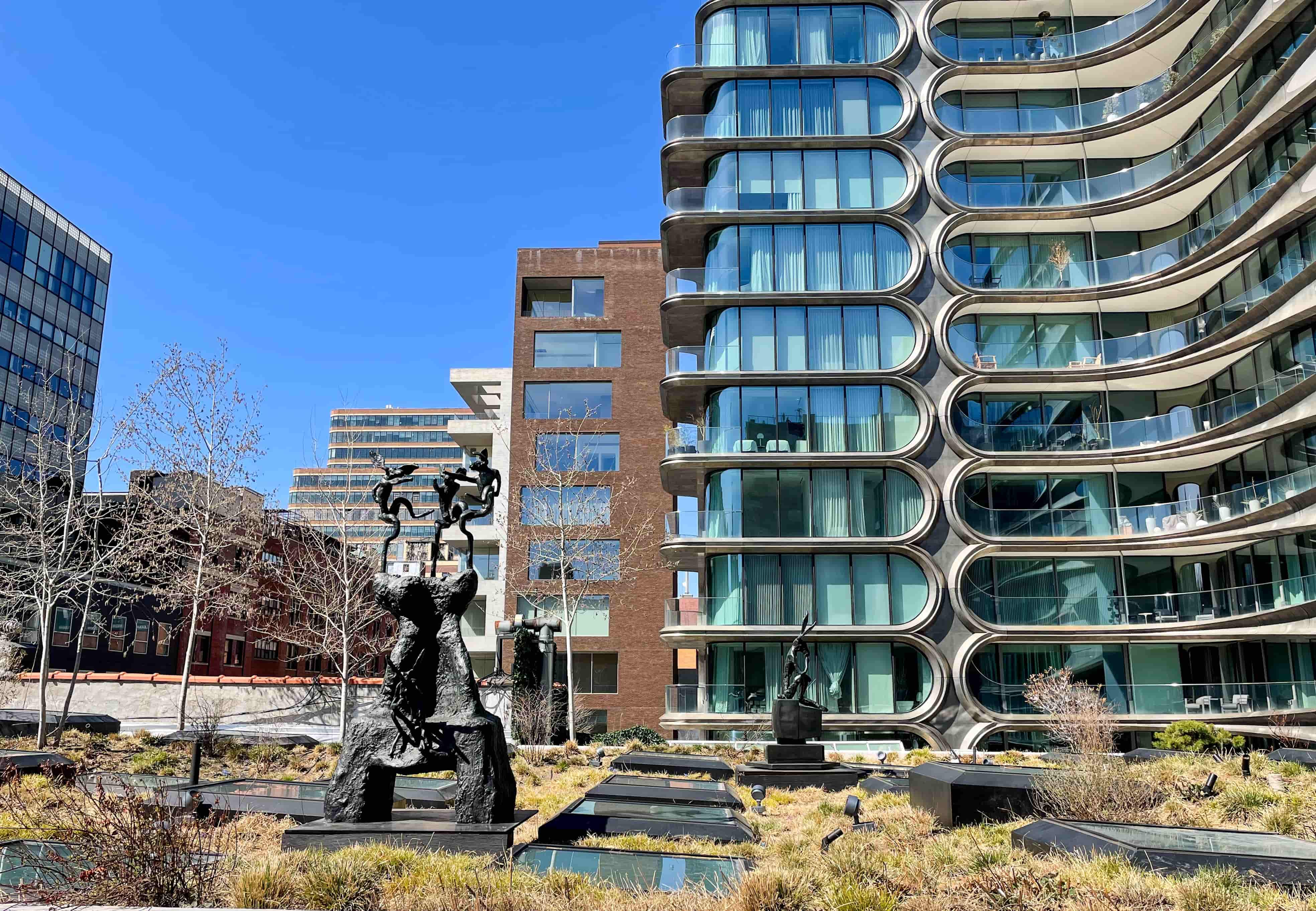 If you’re undecided on where to stay in New York, we recommend areas like Williamsburg, Queens and even staying in Chelsea itself. Subway lines 1, A, C and E stop in or very close to Chelsea.

In Chelsea, the art galleries are mainly set off tenth avenue, which means that they are all very walkable. For example, one of three Gagosians, the Luhring Augustine, the Gladstone Gallery and the Lehmann Maupin are all found within the same block.

This is a map view of the art galleries in Chelsea, New York. Remember, there are Chelsea art galleries openings all the time and this is subject to change.

We’re now going to focus on three of the most interesting and iconic Chelsea art galleries NYC has to offer. These are:

Fortunately, the artists and residents of New York also run regular ‘Gallery Crawls’ each Thursday night. Between 6 pm – 8 pm, most of the new exhibitions are launched on Thursdays and the gallery crawl is a brilliant opportunity to access brand new exhibitions. But more on that later.

When it comes to the best art galleries in Chelsea, Hauser & Wirth are always mentioned in the debate. Based on West 22nd Street, the building has five separate floors which offer plenty of variation in the art for visitors.

May 2022 exhibitions include ‘untitled’ by Nicole Eisenman, which examines the relationship between painting and sculpture, and ‘The New Bend’, a curated collection of textile art that has been contributed to by twelve artists.

Expect to spend up to a couple of hours at this gallery, as its extensive size means that there is a lot to see. With entry being free, it’s a great way to occupy your time in New York on a budget, or simply enjoy one of the most iconic galleries in Chelsea.

Running for over forty years, this gallery focuses on tribal and indigenous artworks from around the world. Its mission is to bring artwork that was never intentionally meant for the mainstream to the eyes of people, everywhere.

The Cavin-Morris Gallery currently has a number of exhibitions on. These change approximately every six weeks. In May 2022, visitors can see ‘Turning Point’ by Simone Pellegrini, which focuses on hiding secrets in plain sight, through her native American style artworks.

Moreover, guests to Cavin-Morris will find an anonymous exhibition called ‘Tantra’, surrounding the Hindu practice of meditation and spirituality. Admission fee to the Cavin-Morris is free, but compared to many other New York Chelsea galleries, this one is smaller. Budget approximately an hour in order to admire the art.

Originally opening in 1974 in another district of New York, the newly refurbished Dia Chelsea arrived in April 2021. With a huge history as arguably the gallery that put New York art on the map, Dia was widely regarded as the trigger for many other galleries to open in the city.

Now, Dia Chelsea has completely changed its vibe. From what was once seen as an exclusive art club, the admission fee has been demolished and the gallery is more accessible than ever. As far as Chelsea NYC art galleries go, Dia should top the list for those looking for a modern and contemporary experience. 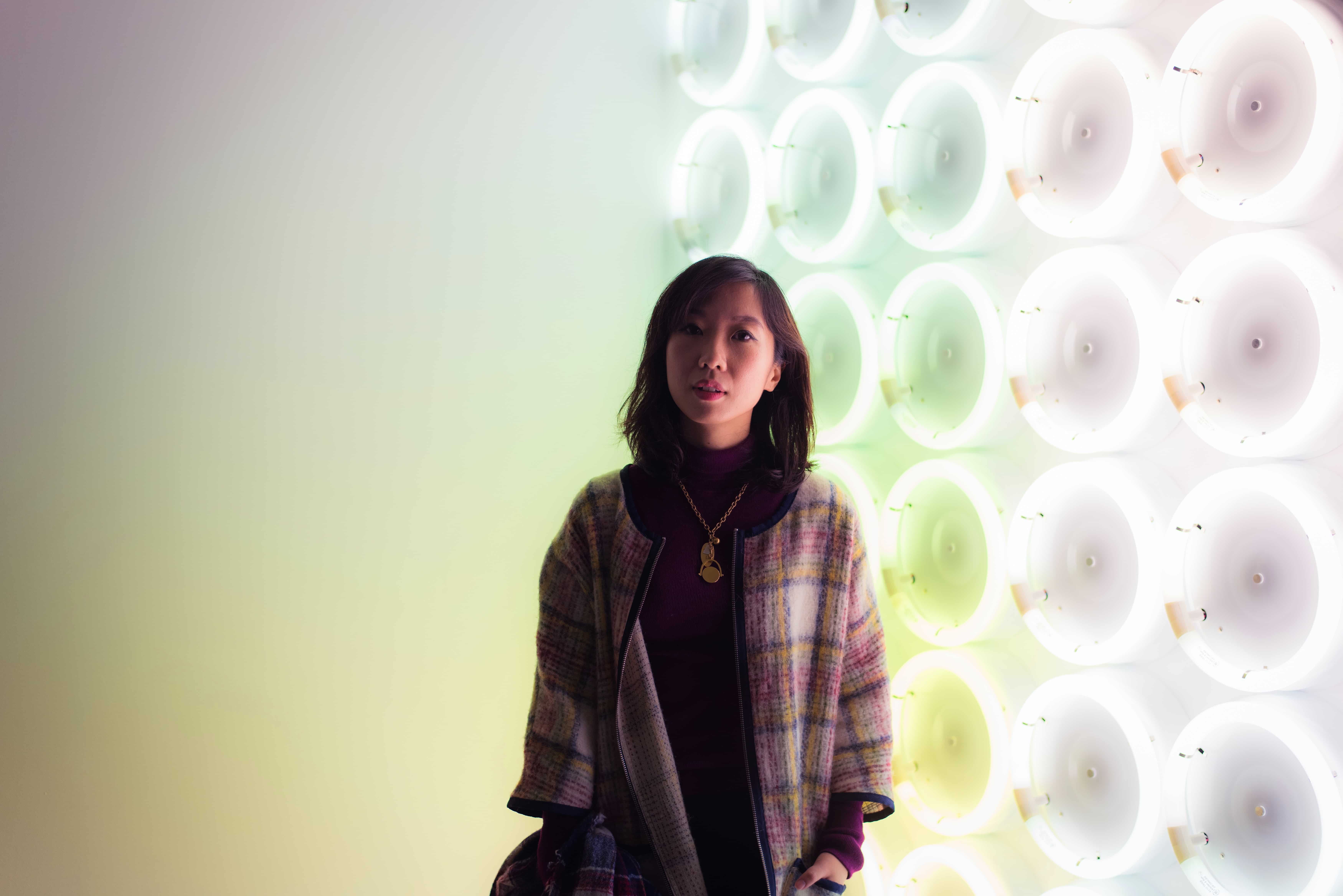 Its opening exhibition with Lucy Raven was met with popularity, and the current artist in residence is Camille Norment. Camille’s exhibition, titled: Plexus, explores sound and acoustics. It’s a more immersive experience than some traditional exhibitions, as she links pieces at two separate locations via sound waves.

Alongside the exhibition, Dia holds Thursday night immersive events at 6 pm each week. This, as well as benefit events for the Dia Foundation, mean there is almost always something going on at the Dia Chelsea gallery.

As mentioned, many of the openings for new exhibitions occur on Thursday nights in Chelsea. This makes it one of the best time to visit an art gallery, since there is usually plenty of free snacks and refreshments on offer, too.

To access all of Chelsea art galleries current shows, the tradition is to do a ‘gallery crawl’. Similar to that of a bar crawl, the Thursday night gallery crawl is completely free and allows visitors to learn more not just about the art, but the local area as well. While tourists can plan their own way to see Chelsea art galleries current exhibitions, organized tours are also a great way to experience as many locations as possible.

PRO TIP: for solo travelers, we rate the Thursday night bar crawl as one of the best ways to make new friends in New York. We can agree that this huge city can be fairly intimidating at times, so ease into the culture by going at your own pace on a gallery walking tour.

Accommodation near art galleries in Chelsea

Chelsea is most definitely the area to stay in if your reasons for visiting New York include any form of art. There are certainly many galleries apartments in Chelsea available, which are featured because of their vicinity to the art hub. However, many of these require long-term rental contracts and can run between $5000 – $10,000 per month.

Fortunately, Selina Chelsea offers an alternative. With accommodation options to suit every budget, Selina’s chic amenities include an onsite garden, cafe, kitchen and restaurant. The rooftop bar is also not to be missed. Moreover, it’s less than a few minutes’ walk away from many of the art galleries in Chelsea. 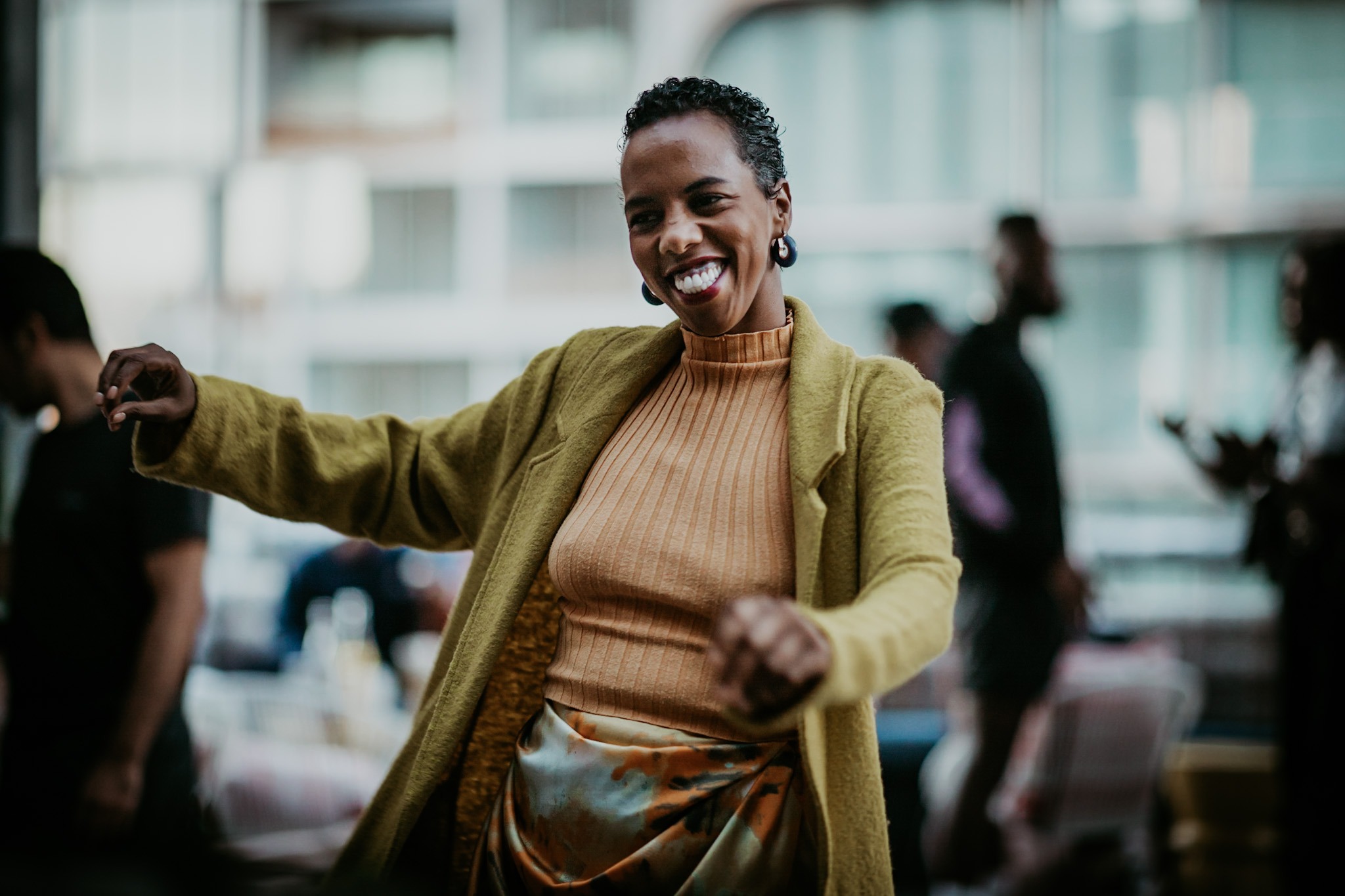 Perfect for couples and solo nomads alike, the Chelsea location brings the magic of New York to the masses. As it’s right there in the arts hub of the city, there are easy links to upper Manhattan, New Jersey and Brooklyn so that tourists can see it all.

Alternatively, the districts of West Village, Greenwich and Soho are all placed within walking distance of the gallery area. Though it may be harder to find affordable accommodation in these areas, they are all conveniently located. Anyone visiting here should still get beautiful views of the New York skyline and find delicious cafes and restaurants within reach.

Speaking of food spots, there are a ton of restaurants near Chelsea art galleries. So, after you’ve spent your days trapesing around the exhibitions, know that you won’t have to walk far to find some great food.

The first stop should be none other than HOWM (pronounced ‘home’). Set on a beautiful rooftop in the heart of Chelsea, they specialize in an array of small dishes that are supposed to be shared, tapas-style. Notable menu items include a nod to Selina’s pan-American roots, with Peruvian ceviche, empanadas and guac all on offer. 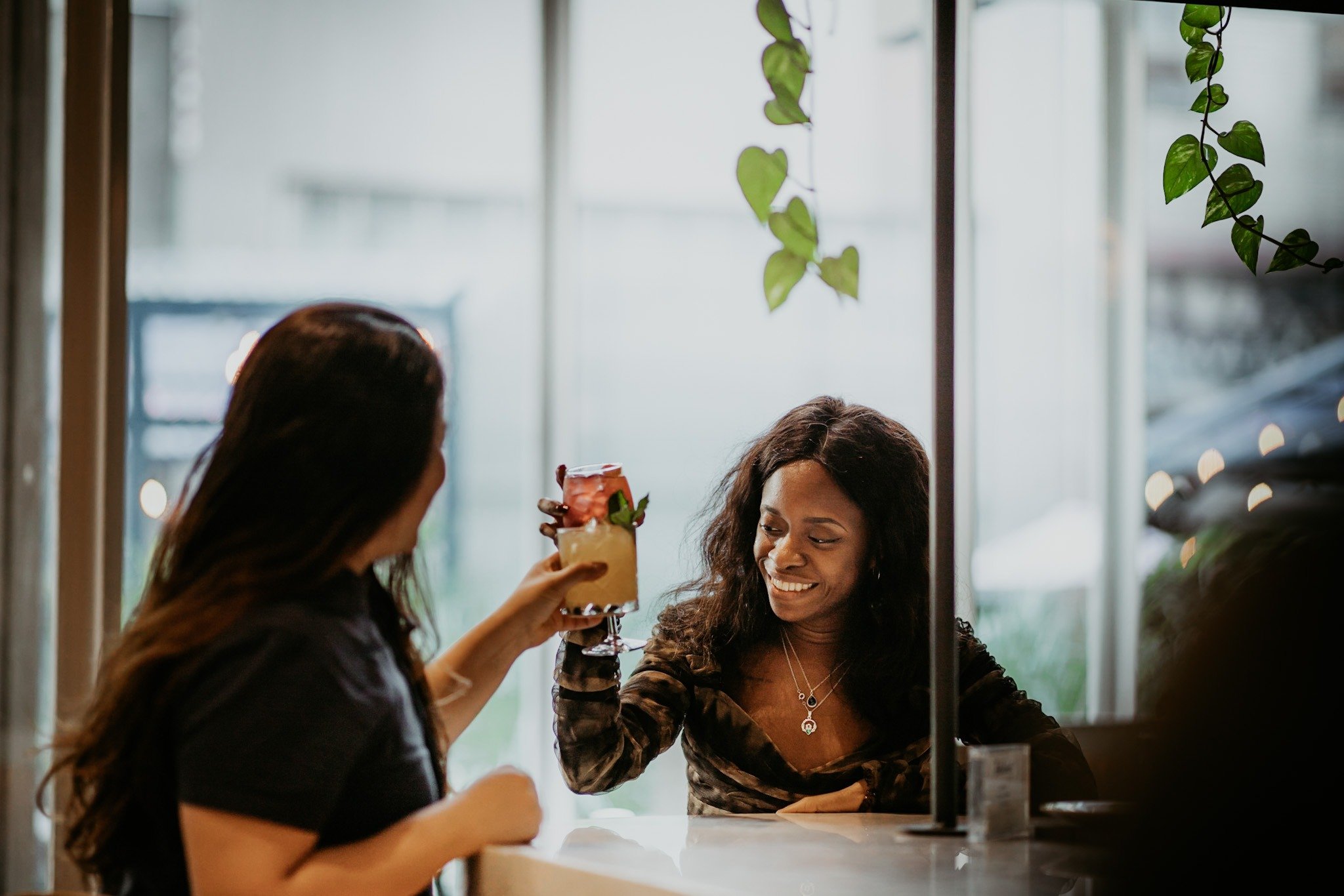 For a truly American experience, a trip to Eataly might be required. Although this restaurant chain specializes in Italian cuisine, the atmosphere and service come with an American twist.

Cull & Pistol is a full-service seafood restaurant, located right outside of the fish market. Fortunately, this is only a stone’s throw away from the art galleries. New York’s Chelsea district also offers ‘Jack’s wife Frida’, an affordable eatery with other locations in Tokyo, Japan. The dish selection is far from Japanese though, with chicken schnitzel their most popular menu item.

With Selina based inside the Chelsea district, we’re at the forefront of the updates when it comes to Chelsea art galleries. New York is a magical city, and we’re proud that our staff can offer local-only knowledge when it comes to exploring.

So, if you want to get off the beaten path (even in one of the world’s most popular destinations), check out Selina New York to get an experience as unique as you are.