From the shore of Lake Michigan to the Skydeck of the famous Willis Tower, there is so much to see in the crown jewel of Illinois, Chicago. If you are planning a weekend escape, it can get overwhelming to decide what things to do in Chicago first.

So, we have brought you a Chicago 2-day itinerary, following which you can visit and experience the famous Chicago tourist spots.

What Makes Chicago Worth a Visit?

Getting nearly 55 million tourists a year, Chicago is the second most visited city in the US after New York. All these visitors come to this city because it has something to offer for everyone. Not only the Chicago tourist spots, but the whole city is a place to see, a sight to behold.

Another thing that sets this city apart is that it was rebuilt from scratch over the course of history. The infamous Great Chicago Fire reduced a major part of the city to ashes in 1871. When the city was reconstructed, it was done with careful planning and extreme attention to detail.

The Chicago skyline has a mix of architectural designs and trends of the whole 20th century. The beauty of the city is further magnified by the Chicago River, which calmly makes its way through the heart of the city.

From downtown Chicago attractions to activities in Chicago, there’s a lot that you need to do to make your 2-day visit worth your while. However, you need a place to stay before you can start exploring the city. Right?

Where to Stay in Chicago?

You can choose to stay anywhere in the city but if you want to experience the perfect balance of amenities, location, and service – consider Selina Chicago Hotel. Situated near Magnificent Mile street, Oak Street Beach, just next to Millenium Park, the hotel has everything from a special bar with cool booths to a second-floor cafe library that offers exuberant views of the city. 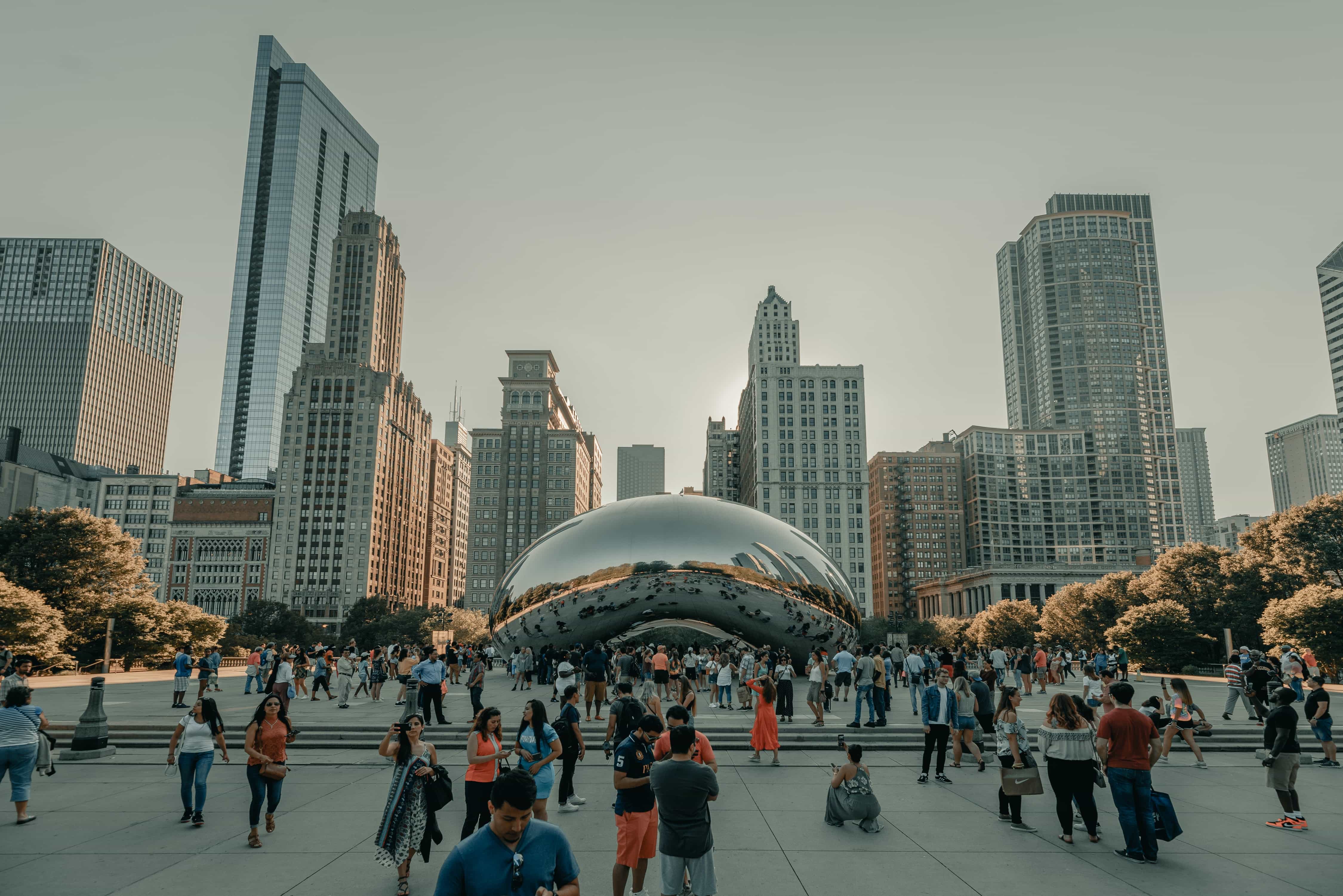 The hotel is connected to the restaurant in a seamless way with phone booths and a coworking space. You’ll find all the amenities like a common kitchen, cinema, and a fully functional gym. There even are halls and event spaces that you can rent. And if you want to save money on transportation, you can rent scooters and bicycles from the hotel.

Assuming that you have reached Chicago and checked into a hotel, here’s what you can do in two days.

The best way to start exploring Chicago is by having a bird’s eye view of the whole city. You can do that at 360 Chicago, formerly known as the John Hancock Observatory. This public observatory is situated on the 94th floor of John Hancock Tower, 875 N, Michigan Avenue.

360 Chicago also has one of the most unique things to do in Chicago – the TILT. A fully enclosed moving platform that literally tilts you over Michigan Avenue from the 94th floor of the tower, it is the highest joyride in the city.

The next Chicago top attraction is just half a mile south of 360 Chicago. It is the portion of Michigan Avenue from Oak Street to the Chicago River. The poshest area of the city, the Magnificent Mile, is one of the most famous shopping places in the US.

Even if you are not in the mood to shop from the pricey outlets on the mile, you can witness the likes of Chicago Water Tower, the Tribune Tower, and the Wrigley Building in this area.

Go on a Gangster Tour

Even though Chicago is a peaceful city today, it was not like that always. This city has been home to some of America’s most notorious mob bosses, most notably Al Capone.

If you want to know more about this part of the history of Chicago, you can go on a guided tour of the Chicago Loop, an area of the city that was the hub of mob activity in the 1920s and 1930s. This is something that you might not find on any Chicago visitors’ guide.

After you’re exhausted and hungry, you can always experience the amazing food Chicago has to offer. No visit to any city can ever be complete without feasting on the offerings that are unique to them.

Here are some recommendations on where to eat in Chicago. This is not the final verdict, you can gather local intel too. 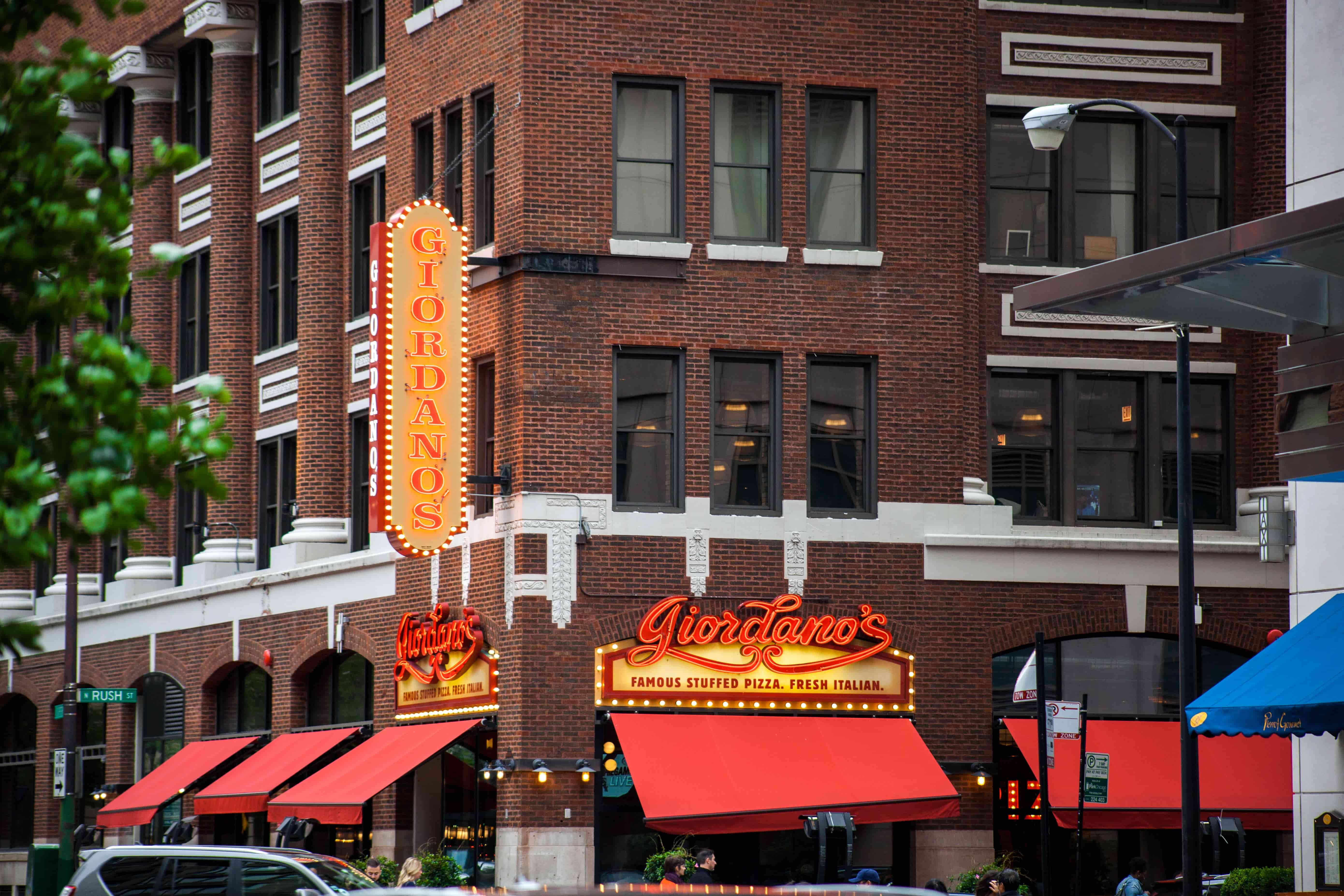 This is one of the most decorated restaurants in all of North America and has been on Elite Traveler’s Top 100 Restaurants list six times. You can go to the Salon that offers a 12-course meal or, better yet, experience the Kitchen Table for ultimate luxury dining.

Offered by veteran chef Curtis Deffy and businessman Michael Muser, Ever Restaurant is another of the best dining places Chicago has to offer. This restaurant is open Tuesday to Saturday. Due to its popularity, the dining process can take up to two hours, but the delicious 10-course meal will make it worth your while.

The location of this restaurant might not be the very posh one but the interior and the dining are nothing short of perfection. There is a single menu offering 10 courses that will take you on a delicious world tour.

The perfect start of your second day could be visiting the Willis Tower – a place rightly hailed as a must-see in Chicago. It’s worth getting up in the morning so that you can avoid crowds and lines while visiting this iconic spot.

The Willis Tower is the tallest building in the western hemisphere. It was the tallest in the world in 1974 when it was built and held that title until 1998. The Skydeck at the top of this building offers some of the most spectacular views of Chicago city.

For the ones who are not afraid of heights, the extended ledges made of clear glass that protrude four feet from the Skydeck offer even better views of the city down below.

The Willis Tower was formerly known as the Sears Tower. Knowing the old name of this iconic building can come in handy as most locals still use it. 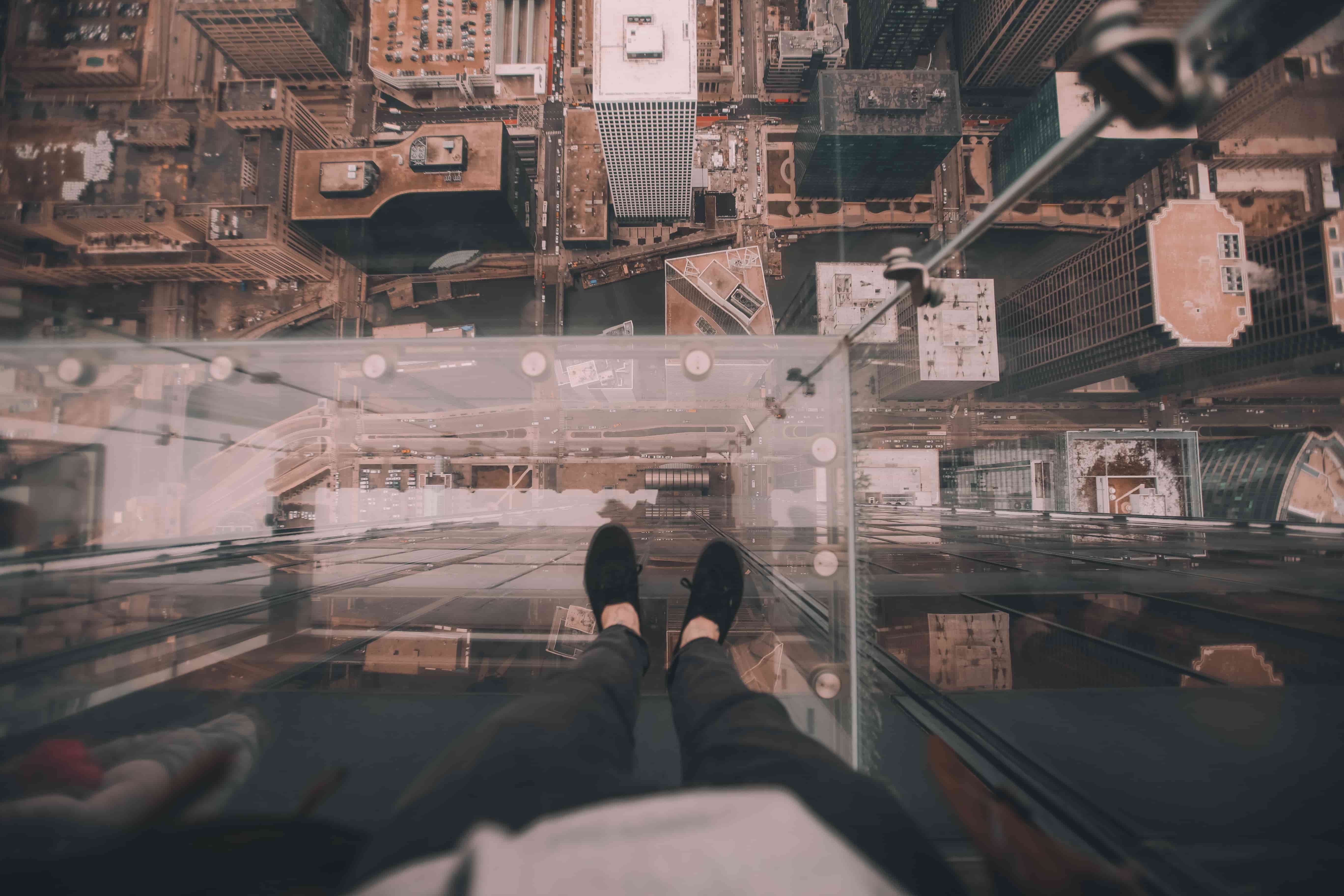 Millennium Park is next on the list of cool places to visit in Chicago. The first thing to do is to take a photo of the Chicago skyline in The Bean at the park. It is a large mirrored sculpture at the park entrance.

If you want to have the place to yourself, you’ll need to go there early in the morning.

The Millenium Park is part of the Grant Park and also includes Jay Pritzker Pavilion, the Crown Fountain sculpture, and Lurie Garden.

If you visit in the winter, there is a free ice skating rink in front of the park. Pack accordingly, if you want to take advantage of that.

Once you are done seeing Millenium Park, the next destination is just nearby. There are many museums in the city, but this one is near the park and has a larger number of attractions.

So, that concludes two days in The Windy City. However, there are some more amazing places to visit near Chicago that must be made a part of this Chicago visitors guide 2-day itinerary.

Attractions Near Chicago, IL – What to Do Around Chicago?

If you can spare a third day, there are some Chicago attractions that are not in the city but are worth every mile you’ll travel to visit them.

Frank Lloyd Wright – Wright, the founder of the Prairie School of Architecture, is regarded as the greatest American architect of all time. He was one of the people who worked on the resurrection of the Windy City after the great fire of 1871.

Oak Park is the largest collection of examples of Wright’s work in the world. From public-access properties like the Unity Temple to private residences like the Bootleg Houses, these show how the Prairie School of Architecture evolved over the years.

It is not very far from Chicago, just 10 miles west of downtown. 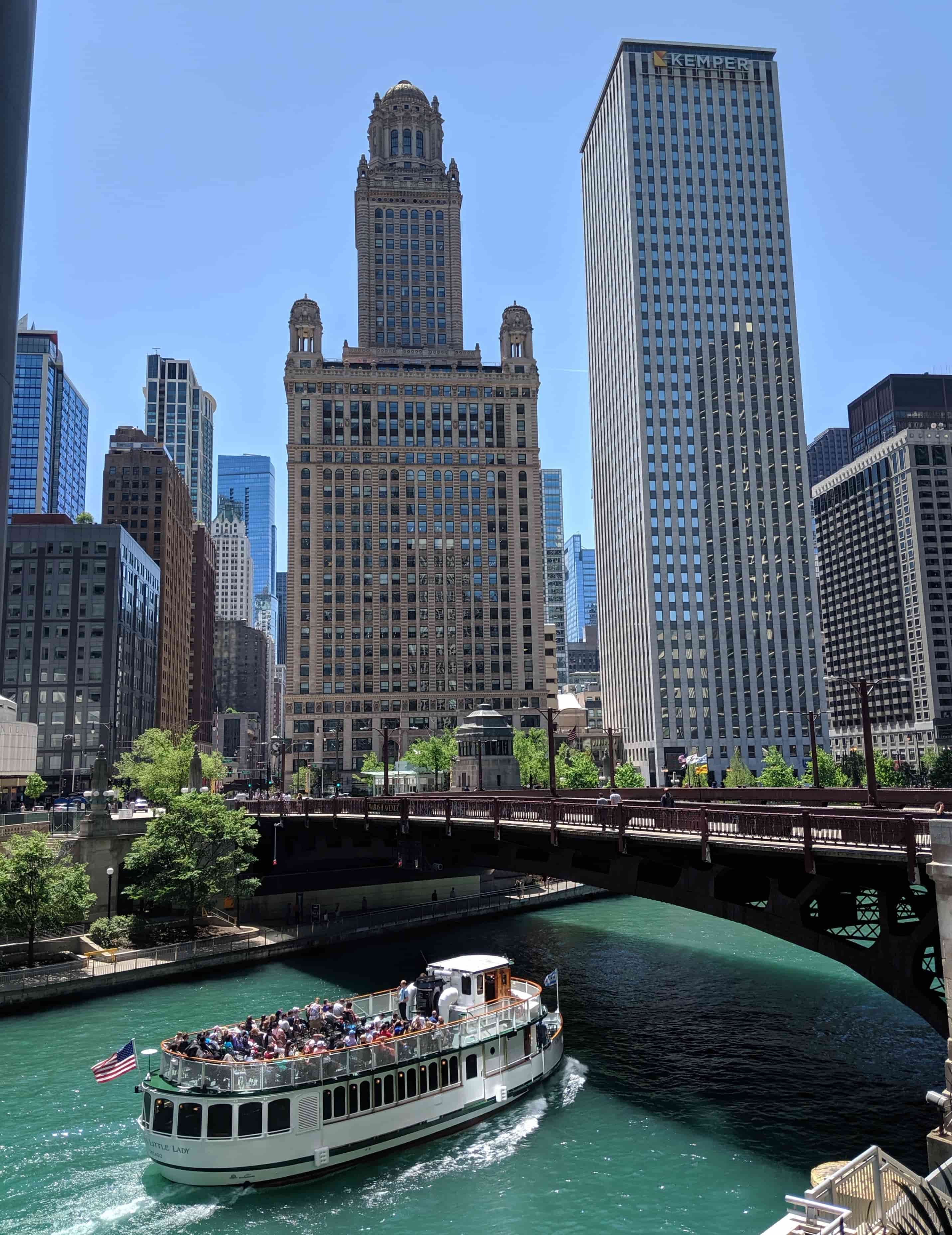 If you are in the mood to get acquainted with some polar bears, look at bottlenose dolphins up close, see alligators in the wetlands, or witness the big cats – the Brookfield Zoo has it all. If you are already in Oak Park, it is just three miles further west, a total of 13 miles from downtown Chicago.

If you want to remember the past and pay tribute to the memories of the ones we lost to the atrocities of the Second World War, the Illinois Holocaust Museum & Education Center is the best place for that.

This place houses more than 500 artifacts, hosts regular exhibitions, and even has the option of virtual reality experiences. It also boasts one of the largest collections of contemporary artistic responses to the Holocaust.

Situated in Skokie, this museum is 17 miles from downtown.

If you visit Chicago in the summer (which is the best time for it), spare a night for the Ravinia Festival, a concert park 25 miles north of downtown Chicago. This park has seen everyone from John Legend to Aretha Franklin perform for the crowd.

This amazing amphitheater is the summer home to the world-famous Chicago Symphony Orchestra, a carousel, different restaurants, a sculpture park, and many more. Pack your bags and spend a night under the stars in this park to feel what Illinois is about.

If you want an escape to nature, this is the best option you have. Situated 25 miles from downtown, this 1,700-acre public garden has some of the best things to do in Chicago if you are a nature lover. From walking in the oak garden to getting lost in the one-acre garden maze, this place has a lot to offer.

If you are in Chicago with your family, this is the best place to visit. From reaching out to touch stars in the 4-D cinema to riding a dragon in the Medieval LEGO Castle, there are a lot of activities in this joyland that amuse adults and children alike. This family attraction is also not very far away, just 25 miles from downtown. 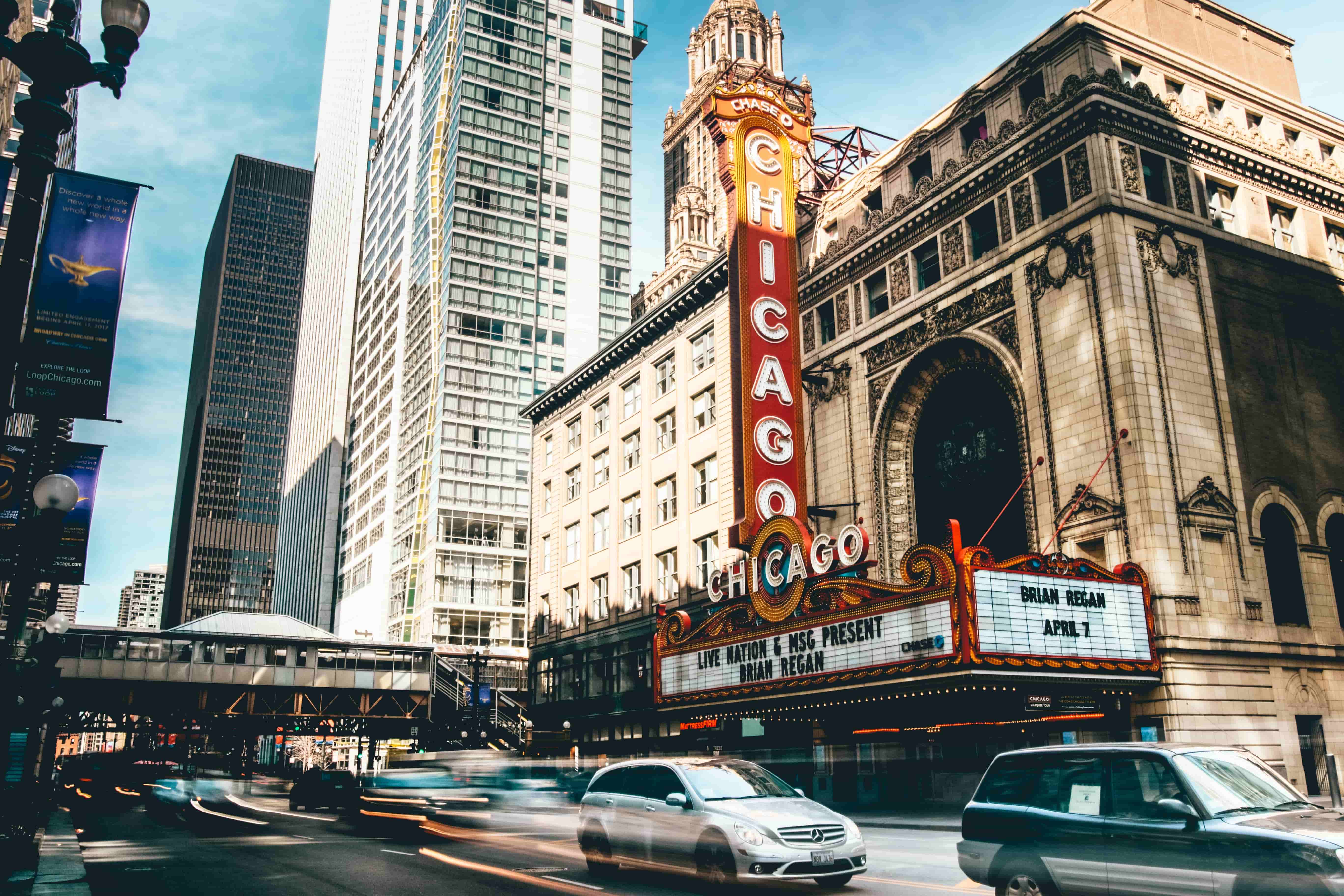 Chicago is the second most visited city in the US and one of the most family-friendly ones. On a two-day escape to the Windy City, you can observe the skyline from 360 Chicago, have a ride in TILT, go on a gangster tour of the city, visit Millennium park, walk on the Skydeck at Willis Tower and go to the Chicago Art Institute Museum.

There are many attractions just outside the city, too, including Oak Park, Brookfield Zoo, Illinois Holocaust Museum, Ravinia Festival, Morton Arboretum, and LEGOLAND Discovery center, to name a few. In short, your trip would be worth every second!

Top 10 Things to Do in Chicago FAQs